Most members of the Omta family tree live in the USA. American phone books show that the Omtas have mainly settled on the west coast of the US. The question is how that came to be. Due to the rapid population growth in the Netherlands and the import of cheap grain from the US after the end of the civil war in 1865, the prospects in agriculture at the end of the 19th century were meager. The price of grain plummets by two-thirds, from 12.50 in 1877 to 4 guilders per hl in 1895. Because land in the west of the US is offered cheaply, this leads to a large emigration of Europeans to North America. Among them are 138,000 Dutch people between 1870 and 1914. Although in the Dutch province of Groningen this initially mainly concerned impoverished farm workers, later there were also farmers in Groningen among the emigrants. In addition to financial considerations, also religious ones often did play an essential role in their decision to emigrate to the US.

Also the fourth and youngest son of Derk Alderts Omta (1824-1896), Tun (Teunis, Tuinis) Omta (1863-1940, married to Rijna (Reina) Jans Veldman on 3 June 1891) emigrated to the USA in 1898. They were sponsored by Jacob Kimm and Willemina Omta (1866-1951), a niece of Tun (a daughter of Klaas Omta, the fifth son of Aldert Derks Omta) who had previously emigrated to Manhattan in the Gallatin Valley in Montana, where they also move to live nearby. Rob Kroes provides some nice pictures of farming in the Gallatin Valley in 1884 (fig. 1 and 2). 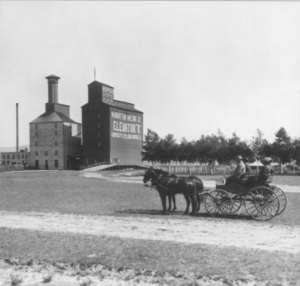 Granddaughter Norma Field-Omta (1932-2018, fig. 3) uses reports from immediate family members to describe in ‘The Story of the Omta Family’ (fig. 4) Tun’s emigration to the US and what happened to his children and grandchildren.  She cites her mother who told her that Tun emigrated to the US ‘because he has had enough of toiling on the small farm in Godlinze’. Her report on her family’s emigration to the US contains several reports of Willem Dirk Omta (1937-2019) about the history of her ancestors in the Netherlands. Willem Dirk Omta writes that Derk Alderts father left each child converted to current US currency about $ 160,000, a considerable sum in those days. But he got eight children, so the heritage for each child became small.

3: The author of ‘The Story of the Omta Family’ Norma Field-Omta

But things don’t go well, on August 29th, 1901, Tun and Rijna get divorced[i] (probably from bed and board) and Tun decides to return to Groningen, tired of ‘digging ditches’. He leaves behind Rijna and three children who stay in the US. She continues as a babysitter and seamstress and dies of jaundice in 1913. They have two daughters and one son, Derk Teunis Omta (1893-1946). In 1923 he marries Augusta Oord (1903-1995) in Yakima, Washington. They have 11 children, including Norma Field-Omta. After working as a teacher in Ruff, Washington and in Los Angeles, in 1929 Derk Teunis buys a farm in Sunnyside, Washington with approximately 7.5 acres of land. Unfortunately, shortly after the purchase, the New York Stock Exchange collapses and the Great Depression breaks out. The situation is very difficult, Derk Teunis and his wife use every piece of land to grow vegetables and fruits. All the kids must help make ends meet, and Derk Teunis becomes a school janitor and finds work as a door-to-door salesman of agricultural products, such as insecticides, with the Watkins Company, in the 1940s the largest direct sales company in the world. Teunis dies in Sunnyside in 1946 and leaves the farm with 1 cow, 12 chickens and 6 turkeys, which his wife later sells.

The obituary of their third child, Irene Tina Michael-Omta (1927-2009) shows how difficult the situation still is. She can’t go to school for a year after her father’s death because she must take care of her eight younger siblings and run the household so that her mother and older brother and sister can earn a living. It also shows how important the Christian faith is to Derk Omta’s family. It is mentioned that despite all her work at home, she still faithfully follows the worship services at the Sunnyside Christian Reformed Church.

Also, Rob Kroes gives an interesting insight into the religious situation in Manhattan, Montana, reminiscent of the one in the Netherlands. He cites a letter from Willemina Kimm-Omta of December 1930 about the religious quarrels in Gallatin County, Montana: There is turmoil here in every area, church, and school. Many people leave church who have come to different views. There are alien preachers here, and there they come to see the light, they say. They find the preaching more appealing. There is a whole awakening going on. They can tell what the Lord had done to their souls. They do not believe in child baptism anymore, nor in many other things. That is why they can no longer go to church here. The millennium is all they can talk about. They have themselves baptized again in the river. It is a strange world nowadays…. But I think itis good for all of us. People talk much more about God’s Word than before.

Norma Field-Omta, 1995, The history of the Omta Family

[i] Interestingly, in 1910, Rijna indicates that she is the widow of Tun Omta. Nowhere in ‘The Story of the Omta Family’, Norma Field-Omta mentions that a separation has taken place. Apparently, the divorce has been kept quiet in the community.