1: Signatures of Derk Arends Omta and his wife Martje Klaassens (Klasen) at the wedding of their son Willem Derks Omta to Derkje Luilfs Edema on 16-12-1829

In 1810 Martje Klaassens and he move to the farm Omtadaborg, which they take over from her mother Engeltje Jans. She bought the Omtadaborg together with her second husband, Aldert Jans on May 17, 1782 ’the place called Omta’ from Martjen Eijses, ‘In addition to the permanent and perpetual confinement of 83¾ grazen land, doing an annual rent of 260 guilder to be paid to theTjassens, annual taxes to be paid ƒ 26,- and 8 ​​stuivers, free from Zijlschot, for ƒ 9,300′. Aldert Jans died of a stroke on 19 April 1805 at the age of 57 (Groninger Courant, 23-04-1805), he was buried on 26 April in ’t Zandt (fig. 2). 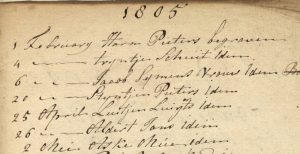 In 1811, the French demand that every Dutch male person chooses his own surname. The French want to know who is who for the implementation of conscription and tax levies. All the sons of Arend Willems and Geertje Arends choose their own surname. Willem Arends chooses the surname Van der Ploeg, Arent Arends chooses Ungersma and Tjasse Arends chooses Biewenga. Derk Arends uses the first four letters of the name of his farm for his new surname: Omta. By taking this surname, he becomes the ancestor of all 217 Omtas who came after him.

Most Groningen farmers prosper in the French period. Also Derk Arends; he pays between 300 and 350 guilders in tax and is one of the highest tax payers in the Westereems department, the merger of Groningen, Drenthe and the German Reiderland imposed by the French. In the years 1812-1814 he is detained in the House of Arrest ‘Poelepoort’ in Groningen (https://hdl.handle.net/21.12105/88976589EA3F4A1BAFBD80D301937D11). Why he was detained is not known to me. Probably he did not want to pay his taxes  anymore , when it became clear that Napoleons was no longer a successful warlord.

From 1818 to 1827 a more difficult period starts. The grain price is halved due to the import of cheap grain from southern Russia via the newly constructed port of Odessa, combined with abundant domestic harvests in 1818 to 1820. To make matters worse, during the Storm Flood from 3 to 5 February 1825, the dikes burst in the Dutch, German and Danish Sea coasts. Fortunately, there are no victims in the Province of Groningen. But in the city of Groningen and the surrounding areas malaria broke out in the hot summer of 1826, because of mosquito plagues in areas that had become swampy. This ‘Groninger disease’ led to the death of about 10% of the population of the city of Groningen. This was a disaster, of course, but malaria was endemic in the whole Province of Groningen at the end of the 17th and the first half of the 18th century due to poor water management. Because of this disaster, many judicial sales took place. Derk Arends and his third son Aldert Derks could profit from this unfortunate situation. In 1830 they were able to buy additional land in Spijk at a public auction after the owner’s death. As a result, Derk Arends land holdings are very spread out (fig. 3).

Derk Arends has the ambition and the means to give his farm extra prestige. In 1825 he visits the auction of the furniture of the Luingaborg in Bierum. He returns home with a gate, and four marble statues on pedestals for ƒ 30,- to beautify his farm. In 1822 he buys from Anna Hermanna Tjassens ‘two benches on the north side of the Reformed Church in ’t Zandt, on the right side of the pulpit’ (fig. 4). One couch is for his female, the other for his male relatives. This purchase also raises the Omta family’s standing in the church. 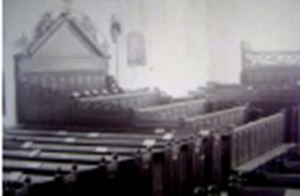 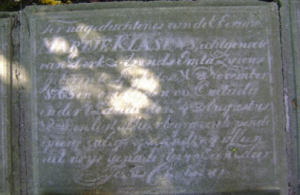 5a: The cleaned gravestone of Martje Klaassens. Funerary text: In memory of the Honorable Martje Klasens spouse of Derck Arends Omta. Was born in Spijck den … November 1765 and died on ‘Omta onder ’t Zandt’ ……. August 1840, and lies buried here hoping for a blessed resurrection only by free grace through the Lord Jesus Christ. 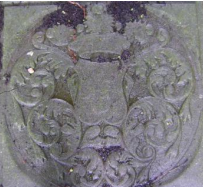 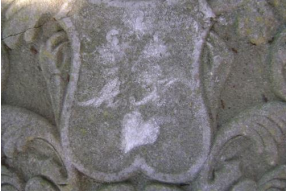 5b: On the left the coat of arms and on the right a detail of the shield with her initials MK and the three clover leaves (a reference to the Trinity) and a heart tilted to the left, towards the gravestone of her husband Derk Arends (fig. 7)

On September 10th 1841, one year after the death of his wife Martje Klaassens, an extensive stocktaking of the inventory, livestock and agricultural land of his farm (no 89, ’t Zandt) and that of his eldest son Arend Derks (no 10 Buitendijks, Spijk) takes place. This stocktaking shows that the Omtadaborg and the farm of Arend Derks are mixed farms. There are cows, horses, sheep, pigs, turkeys, ducks, and chickens. In the barn and in the cellar, we find a slaughtered pig, a barrel of smoked bacon and meat. Large quantities of hay, rye and horse beans are also stored there. In the field are barley, oats, wheat, beans, green peas and potatoes.

His eldest son Arend Derks was already seriously ill at the time of the stocktaking. He dies, unmarried, 10 months later on the 9th of July 1842, of which notice is given by his father Derk Arends. (fig. 5).

6: Obituary  Arend Derks in the ‘Groninger Courant’ Died today in Groningen, with my children G.T. (Garmt Ties) Giesen and wife (Engeltje Derks Omta), my beloved eldest son, in the age of 49 years, after a few years of agonizing suffering. I will pass this on to friends and acquaintances. ’t Zandt, Derk Arents Omta

Given his poor health condition, it seems likely that it is the farm of Arend Derks Omta that is put up for sale on December 14th, 1841 in the Groninger Courant:

Mr S. Reijnders, solicitor in Appingedam, will, at the request of Derk Arends Omta and children, will sell on Wednesday, March 30th and following days, at one o’clock in the afternoon, at that farm, under Spijk: 11 horses 40 hornbills, 70 sheep, pigs, full farm equipment, both construction and milking implements; moreover, all household furniture, such as cabinets, bedding, copper, tin, etc.. The livestock will be sold on the first day.

Also the second son, Klaas Derks (1793-1814) dies young and childless. The third son, Aldert Derks (1796-1889), has fourteen children, including seven sons who reach adulthood, but he does not take over his father’s farm. It is the fourth son, Willem Derks (1798-1849), who goes to live and work on the Omtadaborg, together with his wife Derkje Luilfs Edema (1808-1864), whom he married in 1829. In 1843 their only child is born: Luilf Willem(s) Omta (1843-1881). When Luilf is one year old, his grandfather dies on February 17th 1844, at the age of 76. The death certificate states that his death, like that of his wife Martje Klaassens, was reported to ‘den Burglijken Stand’ by neighbors Klaas Fokkes Jukkema and Jacob Fokkes Lesterhuis (the current Omtadaweg 10). In 1844, on page three of the Groninger Courant, daughter Engeltje Derks Omta and her husband, innkeeper Garmt Ties Tiessen announce the death of Derk Arends Omta, the ancestor of all Omtas (fig. 7a). Image 7b shows his gravestone in the cemetery next to St. Mary’s Church (Snaak, 2019).

Today, the 17th of February, at 4 o’clock in the morning, our beloved father and father-in-law Derk Arents Omta died in Omtada, at the age of more than 76 years, of loss of strength.’t Zandt February 19, 1844. C.T. Giesen and E.D. Omta. On behalf of everyone. 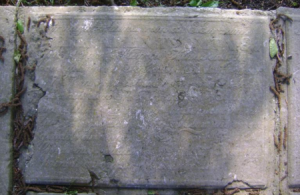 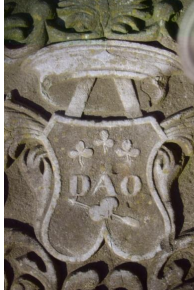 7b: Left: The tombstone of Derk Arents Omta. Right: The coat of arms with his initials DAO with the three clover leaves (a reference to the Holy Trinity) and a heart pierced with arrow (tilted to the right towards the gravestone of his wife Martje Klaassens, see fig. 5b)

Funurary text: In memory of the E. Honorable DERK ARENTS OMTA; husband of Martje Klaassens: … … born in Spijk on October 12, 1767 and died on ‘Omta onder ’t Zandt’ on February 17, 1844. He is buried here hoping for a blessed resurrection only out of free grace through (our) Lord Jesus Christ leaving 5 children, 5 children in law and fifteen grandchildren.