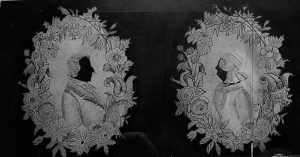 He is very active in the religious field. In 1840, after the secession of the Dutch Reformed Church in 1834, Aldert Derks refused to be confirmed as an elder in the church of the ‘Afgescheidenen’ in Spijk, because he ‘is incapable of doing so’. He joins the Kruisgezinden, a radical secession from the Reformed Church, allied to the thinking of the first separated pastor in the Netherlands, Hendrick de Cock. He became one of the founders of the Reformed Congregation under the Cross in Bierum. He has worked there as an elder for over 40 years (Snaak, 2019). Aldert Derks dies on January 17 1889,  age 92 years, very old for the 19th century. It is especially his eldest son, Derk Alderts Omta (1824-1896), who will have many offspring that emigrate to the USA.

Derk Alderts grew up in Spijk and married the then 22-year-old Grietje Willems van der Ploeg in Bierum at the age of 24. They got nine children, 4 sons and 5 daughters. It is his youngest son, Tun (Teunis, Tuinis) Omta (1861-1940), married to Rijna (Reina) Jans Veldman on 3 June 1891 who emigrates to the US in 1898 and has a large offspring there. They were sponsored by Jacob Kimm and Willemina Omta (1866-1951), a niece of Tun (a daughter of Klaas Omta, the fifth son of Aldert Derks Omta) who had previously emigrated to Manhattan in the Gallatin Valley in Montana, where they also move to live nearby (see the page of Tun). 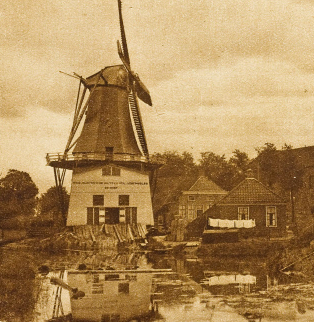 In the middle of the nineteenth century, mechanization puts pressure on employment in agriculture in the north of Groningen. Derk Alderts seeks a livelihood outside farming and in 1861 makes a purchase that he later regrets: he becomes the owner of the ten-year-old saw, hull and flour mill, De Hoop in Holwierde. A few years later, he also buys the Havik mill in Uitwierde, built in 1862. In fact, being a miller is against his nature. Because as early as 1869 it is recorded: “Irresistible desire for agriculture compels D.A. Omta, saw miller, Holwierde, to soon offer 1 or 2 mills for sale”. De Hoop is put up for sale in 1871 and 1875. 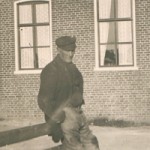 The mill only gets a new owner in 1880: Harm Willems Bleeker (1849 – 1930, on the photo). That year he married Mientje Derks Omta (1849 – 1910), the eldest daughter and first child of Derk Alderts Omta and Grietje van der Ploeg. The De Hoop mill thus remains in the family and Derk Alderts can continue as a farmer and miller on the Havik, which he remains the owner of. He died on Saturday 4 January 1896 in Spijk, a year after the demolition of the Havik. Daughter Mientje Derks and son-in-law Harm Willems still live and work at and at De Hoop. 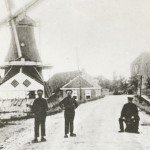 In 1910, the year of his mother Mientje Derks Omta’s death, Willem Bleeker took over the mill from his father Harm Willems Bleeker and in 1942 the grandsons Harm and Reinder became joint owners. They’re only three years old. In April 1945 the mill was damaged during the liberation of Groningen but was immediately repaired. Six months later, the mill went up in flames and was never rebuilt. It is likely that in the undated and undescribed photo on the left Willem Bleeker and his then young sons Harm and Reinder are posing.